Background to the Bells and Heritage Project

Home > Heritage > Background to the Bells and Heritage Project

About the Bells and Heritage Project and what we achieved

Where did it all start?

The bells of St. Margaret’s have rung out across the parish since at least 1553 - announcing services, marking national and local occasions and celebrating key events in the lives of families. Six new bells were installed in 1630; five of these remain in use today. Although bells can last for hundreds of years with little damage, the wooden frame with its wheels, ropes, pulleys and fixings wear out. 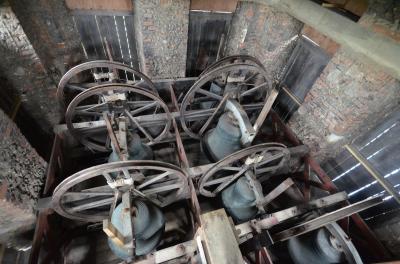 The last time St Margaret’s had a new bell frame was in 1899. This was put 3m higher in the tower than the previous one and 2 more bells were added to make a total of 8, all swinging in the same direction.

The extra height and weight of the swinging bells caused stresses on the tower walls and cracks began to appear. Strengthening works were done in the 1980s but we were told that the best long-term solution was to put in a new frame lower down the tower. However this was going to be expensive. Other restoration and building projects at our Grade 1 listed church, such as restoring the unique painted ceiling and putting in toilet and kitchen facilities were felt to have greater priority. So it was not until 2013 that we commissioned a feasibility plan and got costings. 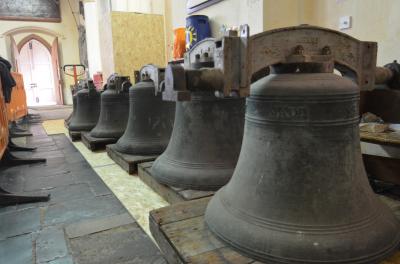 The 'old' bells ready to leave the church May 2017

The best solution was to put in a new gallery for the bellringers to stand above the west door and put a new bellframe just above the room where they used to ring from, half-way up the tower. As the bells would have to be removed while the works took place it made sense to use this opportunity to re-cast the two bells added in 1899 (which were not a good tonal match to the older ones) and a 3rd bell which had been replaced in 1899 so that we would have a very well-matched set of 8.

How we did it

All of this work was going to cost the best part of £200,000. We had about £60,000 saved, promised or pledged but that was a long way short of the total. We talked to other churches that had done this sort of project and explored fundraising options. A grant of 10% of the bell costs was offered by the Suffolk Guild Ringers but it became apparent that our best hope of securing the large amount of money we needed was to approach the Heritage Lottery Fund (HLF) for a grant.

Their initial response was encouraging but we were told there would be stiff competition from other organisations seeking grant funding and we would have to make out a very good case for our project in terms of its benefits to heritage, people and communities.  This meant that as well as doing the building and bell restoration work we needed to think how we could improve the understanding and enjoyment of the heritage of our church. And at the same time encourage more people, and a wider range of people, to come and see it by providing a wide range of ways through which people could engage with our heritage.

Over the next year we talked to numerous people and local organisations, worked up our ideas, sought volunteers, got lots of cost estimates and put together an outline project programme which, in June 2015, the HLF accepted as good enough to proceed to the next stage of grant application. Then another 12 months was spent working up those ideas into concrete plans, getting firm costs, estimating timescales, securing formal authorisations where needed and resubmitting a detailed project plan to the HLF. A six-month wait was rewarded with good news at the end of 2016, with the offer of a grant of up to £163,000 to complete the project.  Then the hard work really started!

Refurbishing the bells and clock Teaching and learning about bellringing Re-opening St. Margaret’s to visitors Improving our heritage visitor experience